Posted by Revolution Books Chicago at 2:50 PM No comments: 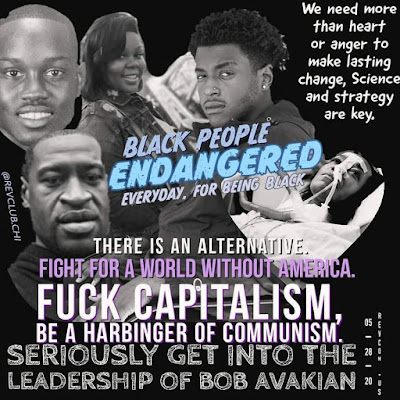 Today at 5–9 PM
We Deserve To Live: We Need Revolution #GeorgeFloyd

Michigan Avenue between Randolph and Madison, (near the Bean) Chicago IL


Posted by Revolution Books Chicago at 1:18 PM No comments:

Shared by The Revcoms and Refuse Fascism Chicago


We will be joining Chance the Rapper and Ja'Mal Green at 5PM at CPD headquarters at 35th and Michigan for this protest.


A press conference and car rally to protest against racist police murder and brutality at 5pm at Police HQ 54th & Michigan. Demand Justice for George Floyd, brutally murdered by Minneapolis pigs last night. (Video is below.) Also last night outrageous racist “social distancing enforcement” struck in Chicago. A press conference & rally is called for today 5 PM. You can take part by staying in your cars.

Read / watch ‘CompletelyAnd Utterly Messed Up’: Video Of Fatal Arrest Shows MPD Officer Kneeling OnGeorge Floyd’s Neck For At Least 7 Minutes’
Police terror has been put on steroids under Trump/Pence fascist regime. Remember Trump saying “Don’t be too nice” to big cop event in Long Island? Wanna know what “not being too nice” looks like? Watch the videos from Mnps and Chicago last night. Trump’s words and deeds have been both encouraging police to brutalize and racist vigilantees to act. He’s attacking consent decrees aimed at getting some small measure of accountability for police abuse. There’s what Trump did at the International Police Chiefs convention in Chicago last fall – offering more military hardware and making clear he would back up police while attacking blue city police depts. who aren’t lining up sufficiently with anti-immigrant and racist policies. Trump is building up and protecting those in the police and military hwo support him.

Also, Here is video from last night tweeted by Chance the Rapper who said, “Yo I seen HUNDREDS of ppl at millennium park and and pics of even more at the parks on the north side. Outside, no masks, no social distancing, enjoying themselves. Please stop sending large groups of militarized police into our neighborhoods exclusively”  I’ve heard a million people have clicked on this video.
Posted by Revolution Books Chicago at 4:40 PM No comments:

Posted by Revolution Books Chicago at 6:11 PM No comments: 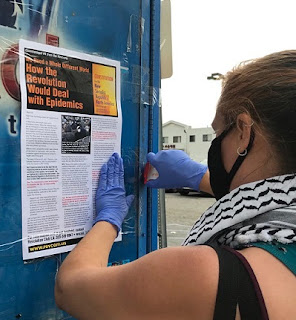 Mass Incarceration and the Coronavirus...
A Death Sentence Waiting to Happen

Register here  now on Eventbrite to access the online event on Monday, May 11 at 4:00 pm PDT.

Check out these books on Mass Incarceration and Police Violence Against the People here.
Posted by Revolution Books Chicago at 7:20 PM No comments:

Watch The RNL Show—Revolution, Nothing Less! Episode 7
subscribe at youtube.com/therevcoms

Share this episode widely
In this episode
This week marks the 50th anniversary of shootings by the National Guard and police on college campuses that shook the world. At Kent state (in Ohio), four students were shot dead by the National Guard during a protest against the Vietnam War. At Jackson State (in Mississippi) two students were shot dead by Mississippi Highway Patrol, and 10 others were shot and wounded. Watch gripping footage from these historic events from filmmaker David Zeiger, followed by commentary and discussion from Andy Zee and Luan Xocoyote.


With the recent wave of racist terror—police and white racists rampaging and murdering—the ugly truth of America is once again being exposed. How did Black people end up in this situation, and what must be done? We'll share Bob Avakian's response to a question posed to him about the Chicago police’s consent decree during a Q&A in Chicago which followed Bob Avakian's talk, Why We Need An Actual Revolution and How We Can Really Make Revolution. In his response, BA speaks to the choices given to Black people by this system and pulls back the lens on the role of the system in the oppression of Black people and what challenges are before people.

In a new feature of the RNL Show, “Pete on the Street” will take us inside the fascist “Reopen America” rallies and the leap in normalization of armed fascist mobs in recent weeks. We'll zoom in to see what went down in the streets of Los Angeles, including with the brave counter-protests held by RefuseFascism.org and the Revolution Tour. And we'll zoom out to discuss the implications of this for society and the world.

Watch The RNL Show—Revolution, Nothing Less! Every Thursday 7pmat youtube.com/therevcoms

Posted by Revolution Books Chicago at 8:27 PM No comments:

Highlighting: The Constitution for the New Socialist Republic of North America (Draft Proposal)

Why We Need an Actual Revolution parts 1&2

SCIENCE AND REVOLUTION by Ardea Skybreak